“It seems that envy is my sin.”

As you may realize that, I always put a film quote or TV series quote before and after each of my blog post. That peculiar thing is there not without a reason. I love to watch films (and also several TV series) and since I started my PhD this craving for distraction is getting bigger and bigger. The easiest getaway from my ‘boredom’ of student life is watching films. First, it’s because this university where I study in has a built in film cinema and it offers an amazing price deal for the students. Second, streaming movies legally is also extremely easy. I have Netflix and also Amazon Instant Video. Once I installed the mobile application, it’s unstoppable. One day, I found this challenge on Twitter with the hashtag #30DaysMovieChallenge. It fascinates me as a movie enthusiast, so I decide to join in. But, I have to make some adjustments to some terms and words in order to fit in the British English standard. For example, I have to change ‘favorite’ onto ‘favourite’, ‘movie’ to ‘film’, and ‘theater’ to ‘cinema’. So, my new version of ’30 Days Movie Challenge’ is transformed onto ’30 Days Film Challenge’. Feel free to join into this movie challenge as well, you can grab this picture below if you want. 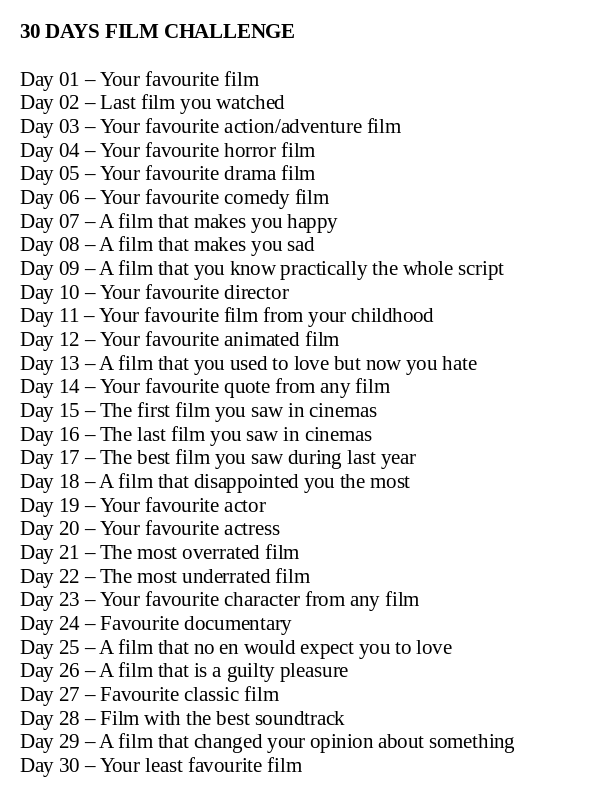 The original challenge is to post one tweet every single day for 30 days, but I just can’t the stand the fact that I have to tweet everyday. I will break this challenge into two parts because this way is more convenient for me and it’s inline with my commitment to update this blog biweekly. Here we go, my list for day 1 to day 15 of my 30 Days Film Challenge.

For this category, I have to go with Se7en (1995). After watching this, every crime/thriller/detective kind of films are just not good enough.

I definitely pick Avatar (2009). I love this film very much although some people may argue that this film is just a CGI modern version of Pocahontas (1995).

I go with The Sixth Sense (1999) not because it’s a very frightening, but because the acting and the plot twist are mind-blowing.

The Curious Case of Benjamin Button (2008) is definitely unrealistic, but it offers a very deep and beautiful meaning of life.

Easy A (2010), all of the cast are just charming and of course, it’s an entertaining film.

Just by watching the festivities of this film, Rise of Guardians (2012), you feel like you’re on holiday.

When I saw the word ‘sad’, this title just pop up on top of my head. Her (2013), I just feel that I can relate to the main character deeply.

Day 09 – A film that you know practically the whole script

I should go with Ada Apa Dengan Cinta (2002), maybe? Because, It’s in Bahasa Indonesia and I remember a lot of the lines from this film.

I have to go with probably a mainstream answer here, Christopher Nolan. As far as my knowledge goes, I never watch a terrible film from his directing. By the way, don’t you think he looks similar to Leonardo DiCaprio?

Day 11 – Your favourite film from your childhood

This film was played several times during the Eid Fitr holiday when I was a kid, Children of Heaven (1997). I recommend this film to everyone.

This is a very close call between Wall.E (2008) and Inside Out (2015), but I decide to go with Wall.E (2008). The first-half of this film is practically a silent movie. A silent movie about romance. A romance story of robots. The best part is I feel emphatic for them. Nothing can beat how I fall in love with both of the main characters.

I don’t actually hate this film, Frozen (2013). The reason I put this film here just because I have watched this film for gazillion times with my niece on holiday two years ago. I just start getting annoyed by this film.

Day 14 – Your favourite quote from any film

It just so easy to remember, easy to repeat, and somehow very amusing.

Day 15 – The first film you saw in cinemas

I will stop here. I will continue the challenge in the second part which I will update approximately two weeks from now. So, stay tune.

“Earlier you said that there were some people who know you well. Why do I get the feeling that that is not true?”